I’m not really a mechanic, I just play one on the homestead

yeah… not really a mechanic….   On the homestead, you must be flexible, educable and, inventive.   Something is always bound to break or malfunction and, when it does, three other things will break down too…

We have had no luck with mechanical things since we’ve been here.  If you remember, Bones fixed nearly everything we owned when we moved in.  Now, we must do it ourselves.   Just before Christmas, Bucky Buckboard (the big truck)

Last fall when we popped a tire while retrieving Jr. from the creek.

died and wouldn’t start.  We replaced fuses and M replaced the fuel pump with no luck.  We finally took it to a mechanic who said “fuel pump relay”  which, had been my first guess.  The thing with this particular truck is that the relay is not removable like a fuse rather, it’s integrated into the fuse panel.  Say what!??!  yep… another way they build it to break these days….  between the $500 part, towing, and labor, it was $900 to fix the problem.    all for a $10 switch.  Grrrrr…..

Last week, we were getting a few things ready to sell and found an issue with the carburetor on Cougar’s  (M’s daughter) dirt bike. 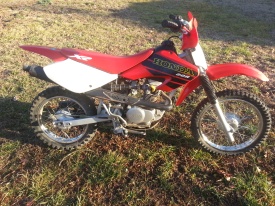 So, I have carburetor work in my future.

Today, and the reason for this ramble/rant, is Jr.  Remember last fall, I replaced a valve cover gasket?  It never did quit leaking… the cover is missing a clip that helps to distribute the pressure of the T-screw which, because it’s missing, has caused the screw to bend the lip of the cover just enough to leak.  not a lot but, leaky none the less…

Anyway, last night we took Jr. down to the creek

to cut some trees that the flood waters had left blocking our trail.  On the way down, we stopped  to trim a branch and Jr. wouldn’t start.  The fuel pump sounded funny.  After monkeying with battery cables  and the fuel filter and shaking him a bit, I thought to knock on the pump.  thankfully, that worked enough to get us down and back.

Today, we were headed up to Bones’ for a bit, stopped at the deer stand to take some measurements, and Jr. wouldn’t start back up.  It’s a tough crank then we see smoke…  From the best I can tell, it might be the head gasket.  Worse yet, from everything I read, I HOPE it’s the head gasket… The other possibilities are even more daunting. 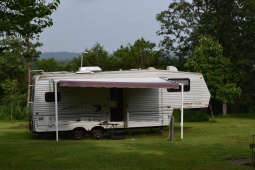 Who wants to come live on my homestead and be my mechanic!??!?!?!?!?   Free room and board.   You just have to fix stuff and, if everything is running fine, cut/clear trees.    The guest house even has AC (for now, until that breaks) 🙂

Ok, rant over.  Thanks for listening. 🙂

Here’s some flowers to brighten your day 🙂

4 thoughts on “I’m not really a mechanic, I just play one on the homestead”