…I only ran one red light

The sun finally came out yesterday in Milwaukee so I was able to get out for a bit. I started out down some of the county roads but there wasn’t much to see. Well, not much except a landfill and a bunch of birds…

At that point I decided it was time to hi-tail it to downtown so I headed south on 145. 145 is part freeway but then it turns into a 4 lane w/ tons of stop lights. It also heads thru some rougher parts of town… By about 40th street I was starting to get a little worried that not only had I chosen a rough route to the city but I was also going to skirt it completely.

Just when I thought I was doomed for sure, I rounded a corner and crowned a hill… And there it was!

I circled town for a few minutes and then decided it was time to find a place to park. I needed a driver for a “photo ride” because it’s hard to focus a camera, on the road, on other drivers, and on traffic lights that are on the side of the road. It’s hard to do all of that and not get lost or worse yet, get in an accident. But, with all of that difficulty, I only ran one red light 🙂 (I still wonder how people can drive and put on make up, text message or talk on the phone)

After circling again, it seemed that the market parking garage seemed to be the best spot… It can be quite difficult to find a parking spot for a large pick-up in the city. Between the difficulty of parallel parking and parking garages w/ a 6.5 foot ceiling the market was really the only place. But, that worked out well because the first hour is free with purchase ($4/hour for parking or $2.50 Iced Tea and free parking). After parking, I headed out the door to see what I could find.

I found the River Walk…

The plank walkway followed the curves of the river and looked up at the backs of restaurants and apartments, both of which have decks and balconies that seem to reach the sky. You’ll find it almost impossible not to eat at least one of the restaurants. My only complaint was the quality of the river… though, I’m sure the recent rains have had some impact on it.

After leaving the River Walk, I walked the streets for a little bit. I wanted to get some close-ups of some of the architecture and mingle a little bit. The smells from the street weren’t quite as aromatic however, Milwaukee is big on fashion! From the people who all look like they’re walking out of a magazine to the beautiful window displays… I wish you could have seen, but I’m not quite ready for portraits… Rather, enjoy some more shots of the city. 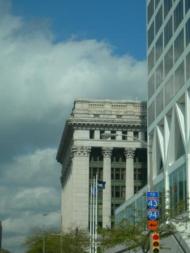 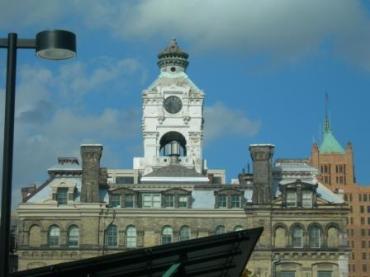 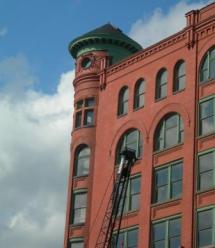 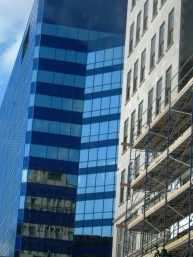 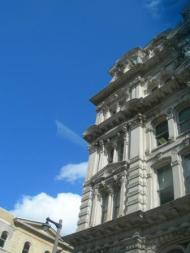 And my personal favorite…

Hope you enjoyed our day in Milwaukee.